Last week once again I attended a swap party at the Junior League and it did not disappoint.

I managed to gather several unworn items from my closet the night before. A few were a bit difficult to part with but something about “you get what you give” came to mind and I decided to give a little more. 15 items total I took to the swap. 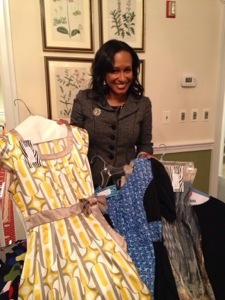 I actually brought 4 pairs of shoes and that took my total to 19. Although they only required 5-10 items I have so much I need to get rid of I could have brought 20 more items.

While we were waiting for the organizers to prepare the room we enjoyed salad, bread and wine. I enjoyed great conversation in a relaxing atmosphere with the members of the Junior League.

Many of you know that I block out time on my schedule every year for the Annual Tossed and Found Rummage sale sponsored by the Junior League. The event is coming up in two weeks and I am so excited! Blog post coming later…..

Back to the swap:

It was interesting the way they organized this years swap. You were given a tag for each item and you turned those tags in after you grabbed your items. 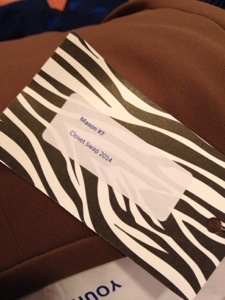 I managed to find 8 items that I thought were great. One item in particular stole the entire show. 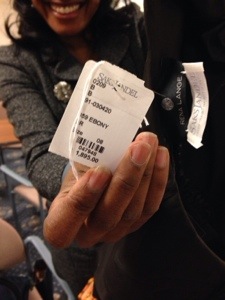 No your eyes are not deceiving you. This Rena Lange dress was originally priced at. $1895.00. I couldn’t believe my eyes. Of course I googled the designer and found many other beautiful creations. What a great find!!!

Sew Frugal & Fashionable and The Urban Sewing Society is all about helping you building a fashionable wardrobe through sewing, refashioning vintage and thrifting. We offer vintage and ready made pop up shops which feature carefully selected clothing and accessories to help you achieve that one of a kind look. We have sewing classes to help you unleash your creativity and style. Follow us on Instagram @SewFrugal and @TheUrbanSewingSociety View more posts